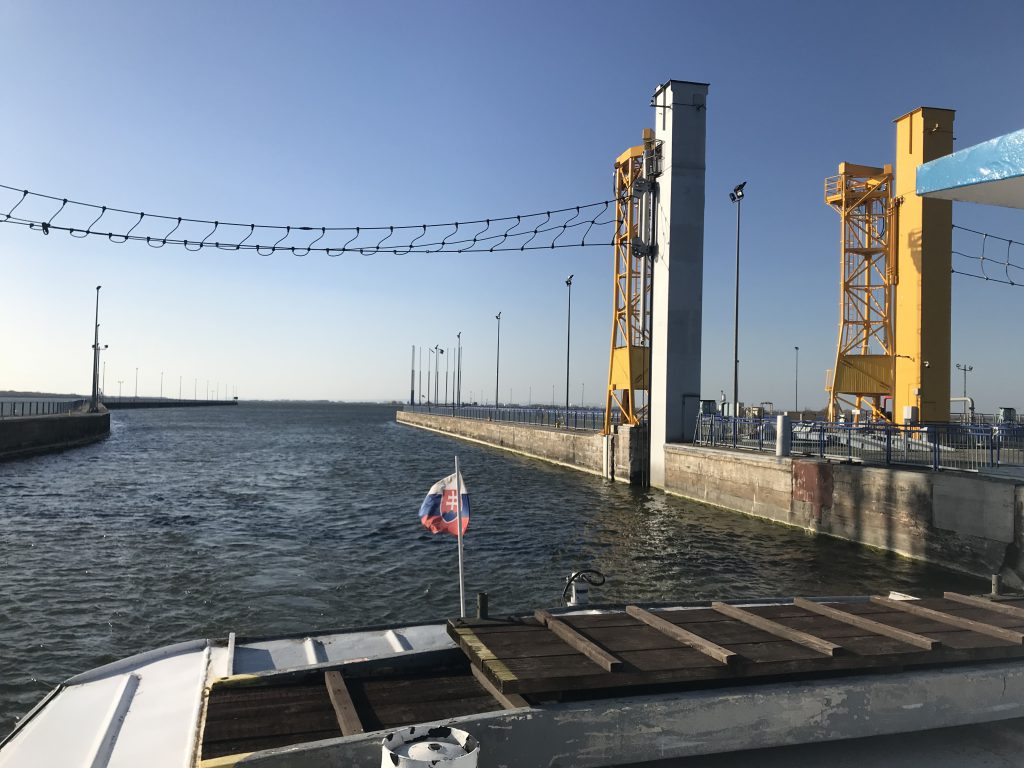 The locks at the Gabčíkovo Waterworks will undergo complete innovation and modernisation over the next years. These are the first major improvements to the locks since 1992, when the waterworks were put into service. The project is co-financed from the Connecting Europe Facility (CEF), a grant programme of the European Commission. VODOHOSPODÁRSKA VÝSTAVBA, ŠTÁTNY PODNIK (VV, š. p.), signed the works contract with the winner of the public tender this week.

The “Upgrade of Gabčíkovo locks” project improves the safety and flow of navigation traffic through the waterworks. Construction work on both locks involves the replacement of the upper segments of the gates weighing no less than 190 tonnes and that separate the lock from the upstream channel. The lower gates that separate the lock from the downstream channel will also be replaced, and these two-segment gates each weigh roughly 450 – 500 tonnes. Upgrades are also planned for the system used to fill and drain the locks as well as the inlet and outlet control valves that open and close the filling channels used to fill and drain the lock itself. Operational security will be increased by stabilising the entire bedrock structure beneath the locks.

The project will make a major contribution towards restoring complete functionality of the lock facilities. According to the CEO of VV, š. p., Ing. Daniel Kvocera, the locks are currently at the end of their serviceable lives and in critical condition. Thanks to the grant, the company was able to expand the scope of the contract and will be able to upgrade 29 more assemblies than originally intended through in-house financing only in 2015.

“The safety of navigation through our Gabčíkovo Waterworks is our alpha and omega. The chain always breaks at the weakest link and we are set to become a more stable and secure part of this theoretical chain, in this case the international transport system, thanks to the project and modernisation of the locks. We have already completed a demanding preparation process and have months of work in front of us, but I am pleased that we are making progress, especially thanks to signature of the contract, and have begun delivering on the conditions laid down in the grant agreement,” said VV, š. p., CEO Ing. Daniel Kvocera.

The Office for Public Procurement and the audit authority at the Ministry of Transport and Construction of the Slovak Republic gave the green light to sign the contract.

Metrostav a. s. was the winner of the international tender for the contract with the lowest price bid (€149,997,450 excluding VAT). The contractor has 140 days to prepare project engineering documentation from signature of the contract and a maximum of 510 days to deliver the modernised and innovated right lock from handover of the project engineering documentation. Once work on the right lock is completed, work will continue on the left lock, with the contractor committed to complete this work within 415 days per the contract. Modernisation will be completed with the waterworks fully operational.

The Upgrade of Gabčíkovo locks project is co-financed by European Union funds. The grant provided by the Connecting Europe Facility (CEF) approved in 2016 totals €122,965,250.