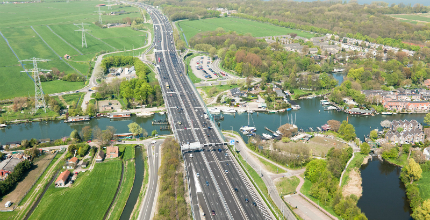 We would like to congratulate our NETLIPSE partner Rijkswaterstaat and the members of SAAOne with their award for Road Deal of the Year by EMEA.

The A1/A6 public-private partnership (PPP) has number of features that lend itself to this award, in a category in which there a number of excellent candidates such as L2 and Brebemi. The deal is actually an old-fashioned, if that is the right term, bank debt. But it was put together at a time, late 2012/early 2013, when old-fashioned bank deals were distinctly out of fashion. In addition, it is the first of four projects that will be proceed via a PPP in the Schiphol-Amsterdam-Almere (SAA) corridor. Given the speed with which the A1/A6 was transacted, the client should not be too worried about using project finance again.

The deal was the first in Europe to show that a range of its banks are still prepared to lend long-term to infrastructure projects. The debt size is €727m with a tenor stretching, in part, to 27.5 years. The debt/equity split was attractive at 90/10 and the margin was not too shabby either – 240bp rising to 325bp with fees at 200bp to 225bp and 25bp for the swap. Another feature of the deal was that the sponsor team won the scheme in November 2012 and managed to reach finance close by the end of February 2013, a quick turnround.

The debt was split into €200m of long-term debt, a short-term 4.5-year construction loan, which is being repaid by SAA, and a €70m equity bridge loan. The lenders are BTMU, SMBC, financial adviser Credit Agricole, Helaba, KfW-IPEX, LLBW, NordLB and UniCredit. The European Investment Bank (EIB) put in its own €260m, 27.5-year loan. Dutch Infrastructure Fund (DIF) holds 43% of the project. EPC contractors Hochtief and VolkerWessels have 20% each, and Boskalis 17%. The project company is called SAAOne. White & Case and Houthoff Buruma advised SAAOne and Linklakers advised the lenders. Pels Rijcken & Droogleever Fortuijn advised SAA.