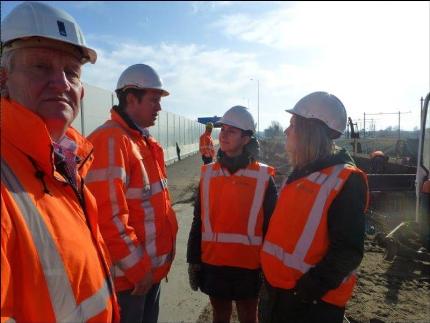 Evin Sundqvist and Josefin Andersson paid a visit to SAA for two weeks to learn more about Rijkswaterstaat. As trainees of the Swedish transport Administration, Trafikverket, they chose to carry out the individual part of their traineeship at the Roadway Expansion program Schiphol-Amsterdam-Almere (SAA).

Trafikverket is responsible for long term planning of transport systems for road, rail traffic, maritime shipping and air traffic. The idea for this traineeship came during a visit of Hans Ruijter, Program Director SAA, to Trafikverket last year. Within the framework of exchanging knowledge and experience between Rijkswaterstaat and Trafikverket, Hans discussed the possibility with his Swedish colleague of creating a Swedish public sector project academy similar to the Dutch National Academy for project management. Following Hans his visit Evin and Josefin came over to SAA to learn more about project management within Rijkswaterstaat.

Tailor made program
Initially Henk van Ommen, projectmanager A10 Oost/A1 Diemen and Daniëlle van der Horst put together a broad introduction program for them. However after their introduction Evin and Josefin expressed their special interest in learning more about DBFM contracts (PPP) and maintenance. Thanks to Henk and Daniëlle and the cooperation of a lot of SAA colleagues as well as colleagues of the regional department of Rijkswaterstaat (WNN) and the department for major projects and maintenance (GPO) a tailor made program was put together.

At the end of her visit we interviewed Josefin Anderson and asked her if the two weeks she spent with SAA met her expectations. A short report will follow in which Evin and Josefin will share their experiences with SAA.

Josefin Andersson
“On the first day of our visit we got a lot of information about the individual SAA projects. Although we planned to focus on safety we changed that view in learning more about PPP. During my study Business Development and Entrepreneurship within Building Technology at the Chalmers University in Gothenburg I learned about the theory of PPP. Now I had the chance to see how it really works in practice. How are DBFM contracts being managed? What does it mean for the organization in respect of control and administration? Which challenges and opportunities are there for the contractor in a DBFM contract?. As far as I know we don’t have DBFM projects in Sweden. However the number of D&C contracts is increasing (a goal within Trafikverket requires 50% D&C contracts in 2018).
We were also impressed by the confidence that Rijkswaterstaat has in their contractors (SCB). For delivering results and monitoring performance, Rijkswaterstaat relies on the contractors’ quality system, whereas Trafikverket still wants that information be owned and obtained by herself.

Another topic we were highly interested in is maintenance. With so many different DBFM contractors in one region maintenance must be complicated. In Sweden maintenance is procured on a regional basis, so that economies of scale are obtained. SAA and the regional department WNN however, work with individual contracts instead of regional maintenance contracts.

Advantages and disadvantages of DBFM contracts:
As advantages of DBFM contracts I mention the larger scale and the positive effects on the life cycle. Positive is the goal of a DBFM project to keep the road available, by incentivising the private sector for road availability. I am really interested in EMVI (economically most advantageous subscription).  In the tender phase only about 30/40% is price based and 60/70% is based on aspects such as innovation, quality of risk management plan or restriction of congestion (hindrance). I will definitely share best value procurement with my colleagues in Sweden as a method to proactively deal with client risks. I think that risk management plans should be the main part of all the contracts; both in D&C and in DBFM contracts.
In my opinion a disadvantage of DBFM contracts is the loss of control; the contractor is in the driving seat but Rijkswaterstaat remains responsible for the road network. In my experience you need a long time to create a change in culture. DBFM contracts differ from standard procedures and that means that you need a different attitude and behavior of employees for their successful management. The many contractors for maintenance working simultaneously in the same region have to be managed by your organization. This could create potential problems with their interfaces. Who is to blame? Who is responsible?
General impression of SAA and Amsterdam
I talked to a lot of different people; it really was a good mixture. I found my trip to the Netherlands worthwhile. It was my first time in the Netherlands and I will definitely come back. I find that it is very useful to step out of your own organization. It makes you think about how things are being managed both in the organization you are visiting but also within your own organization. What can you do differently, what can you learn? I felt very welcome and especially want to thank Henk and Daniëlle for all their efforts to make my program tailor made. And of course all the people that I spoke to. I went to the control traffic centre, talked to contractors and different people involved in the SAA programme and learned a lot. Unfortunately two weeks were too short to talk to a colleague of ProRail. So that means I will have to come back! In the meantime I hope that all of you keep me posted about interesting rail and road matters.”